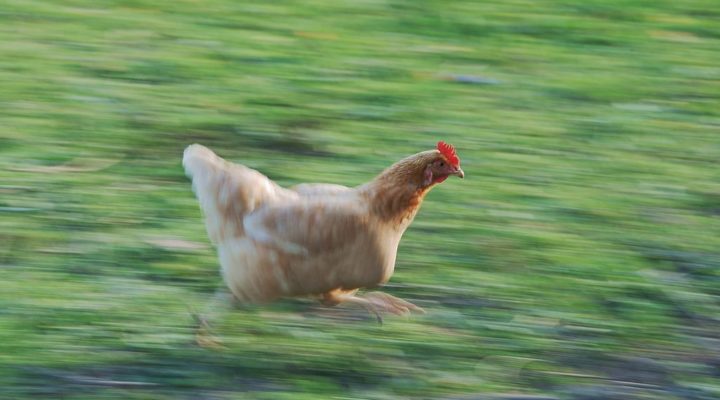 No numbers today. They are silly anyway, should I get rid of them?
So, yesterday a friend of mine posted the title of a highly fascinating scientific paper to Facebook: “A mobile pet wearable computer and mixed reality system for human–poultry interaction through the internet” – if you want to read it, you can buy it from Springer or download it from Researchgate. Or even better, you can watch the video, which has a chicken in a virtual reality suit.

It increases the poultry pleasure… in a scientific way.

(If you want to see other cocks experiencing virtual reality, there is always this blog.)
I don’t think Werner Herzog would approve.
Now that we all had a hearty laugh (Hehe, chickens in virtual reality suits are funny!) and suspected it has to be a student prank, let’s realize that this research has been done roughly ten years ago and that

“Poultry Internet” was one of the pioneering works on virtual reality communication between humans and animals.

Says Wikipedia on Mr Cheok’s biography page, so it must be right. In fact, reading that bio and following a couple of links, it is obvious that this guy is doing really important work, that will probably influence our perception of reality in the future.
Plus, it is probably safe to say that once we’re completely decked out in internet-connected sensors, (“wearables” ugh) our pets are next. I’m already sure that strapping a cheap Android device with a data plan to a dog might not be such a bad idea – if the dog runs away, as they apparently tend to do, it should be possible to just look at an app with a map and see where they are.